IT channel firms head into 2019 optimistic about transformation

Despite the predictions of doom and gloom that rang through the industry a few years back, the IT channel and its ecosystem of partners are quite optimistic about their growth prospects moving forward, suggests CompTIA’s most recent “State of the Channel Survey.”

With disruption and changes striking every sector of technology, IT channel partners may be feeling better than they have in some time.

In 2016, the CompTIA study shows, 63 percent of respondents said they were generally optimistic about the channel’s future; in 2018 that number rose to 75 percent. “Gloomy outlooks have tempered as well,” said CompTIA. The number of channel firms expressing pessimism about the future during the same two years dropped from 16 percent to 5 percent.

One could simply chalk it up to an improved U.S. economy and the subsequent uptick in consumer and small business sentiment. The data, however, points to myriad reasons for the positive outlook. “Nearly across the board, respondents in 2018 ranked factors that bolster good feelings about the channel’s future significantly higher than they did two years ago,” said CompTIA analysts. And in some cases, precisely the same market factors that are creating the most enthusiasm among IT channel partners are also the factors causing some levels of consternation.

One bit of purely good news, attitudes toward the impact of cloud computing have transformed from nearly a decade ago, including during the last two years. The opportunity presented by cloud is cited as the number one reason by respondents to feel positive about the IT channel’s future, shows the survey. More than half (56 percent) of respondents placed it on top of the list compared with the 39 percent that felt this way in 2016.

Less than a third see cloud computing and the shift away from on-premises as a factor leading to pessimism, though that is statistically flat from the CompTIA survey in 2016.

“Cloud has always been a lightning rod for the channel; one part loving it, one part hating it, and nearly no part able to ignore it,” said CompTIA researchers. “As time has gone on, however, the reality that cloud is now the fundamental enabling infrastructure for IT has sunk in, and the channel has had to decide how they were going to use it.”

Beyond the cloud, nearly across the board, IT channel partners ranked factors that bolster good feelings about the channel’s future significantly higher in 2018 than they did only two years prior . Respondents expressed increased excitement about a broader use of technology by all types of customers, growing customer demand for business and consulting services, and businesses continued need to put their faith in a “trusted advisor.” Even the increased complexity of today’s IT solutions and services is seen as a positive for nearly half of respondents, compared to just more than a third who felt the same way in 2016. 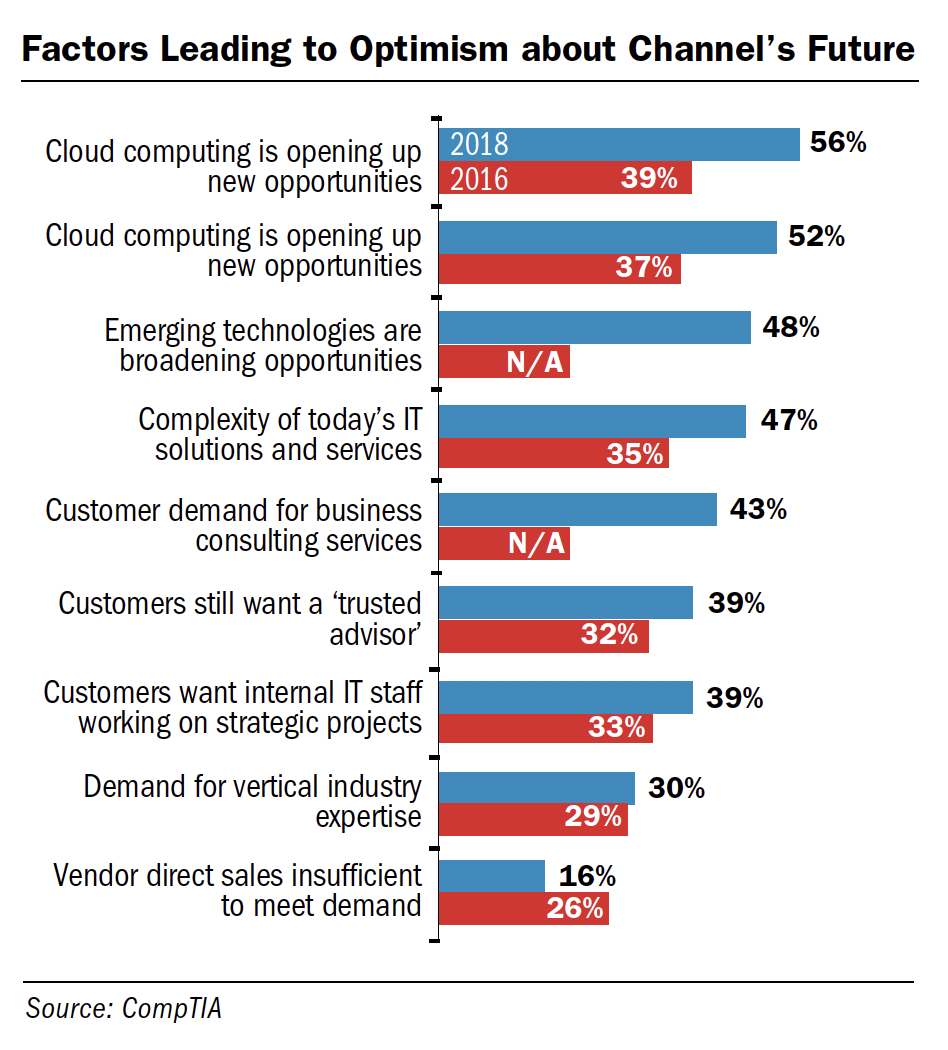 Relating in many ways to the use of emerging technology, increasing complexity, the shift to cloud and the broader use of technology in general, vertical specialization is becoming increasingly popular among IT channel partners, show CompTIA’s figures. Virtually all channel respondents in the survey reported at least some vertical industry work within their business, with three-quarters describing that work as important. Of that 75 percent, four in 10 deemed their vertical business as very important.

“Focusing on an industry allows channel firms to move beyond horizontal solutions to become more granular in what they do; in effect, attaining know-it-all status in a niche market such as healthcare, retail, manufacturing and beyond,” explain CompTIA researchers 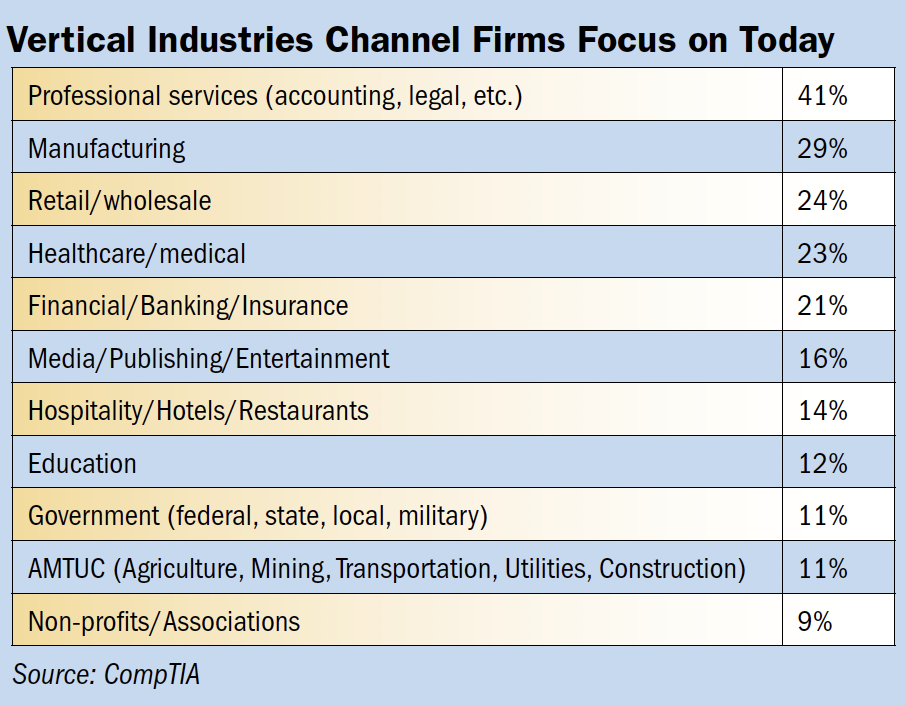 The drivers toward virtualization are varied, including competitive differentiation (named by 42 percent of respondents) and vendor push (22 percent), but more than anything, channel partners say the trend is customer driven (64 percent). That’s because, quite simply, verticalization means tech providers are speaking the customer’s language. Likewise, 54 percent of channel partners cited vertical specialization as a competitive differentiator.

“Most basic infrastructure engagements – devices, networking, security and other hardware – are repeatable; it’s the same sales and implementation process whether you are dealing with a small doctor’s office, a car dealership or a manufacturing plant,” explained CompTIA researchers. “But it’s understanding the software, all of those specific use applications that pertain to the industry in question, that will earn you true vertical street cred.”

Applications-specific vertical expertise, in particular, fits well in today’s cloud-based software world, said CompTIA. Many cloud-based ISVs offer discrete applications tied to specific industries, and these are often small firms lacking largescale sales infrastructure but wanting to grow. “As a result, many are beginning to experiment with indirect channel partners to grow their footprint and penetrate various customers segments,” said the CompTIA study.

CompTIA is quick to note, however, that at least some respondents that report to doing vertical work may only be selling horizontal infrastructure solutions to a cluster of customers in the same industry. “That is not the same as becoming an expert in the applications and business processes that an individual vertical such as retail requires,” said the IT association.

In other words, take this findings, as with most self-reporting, with a grain of salt. 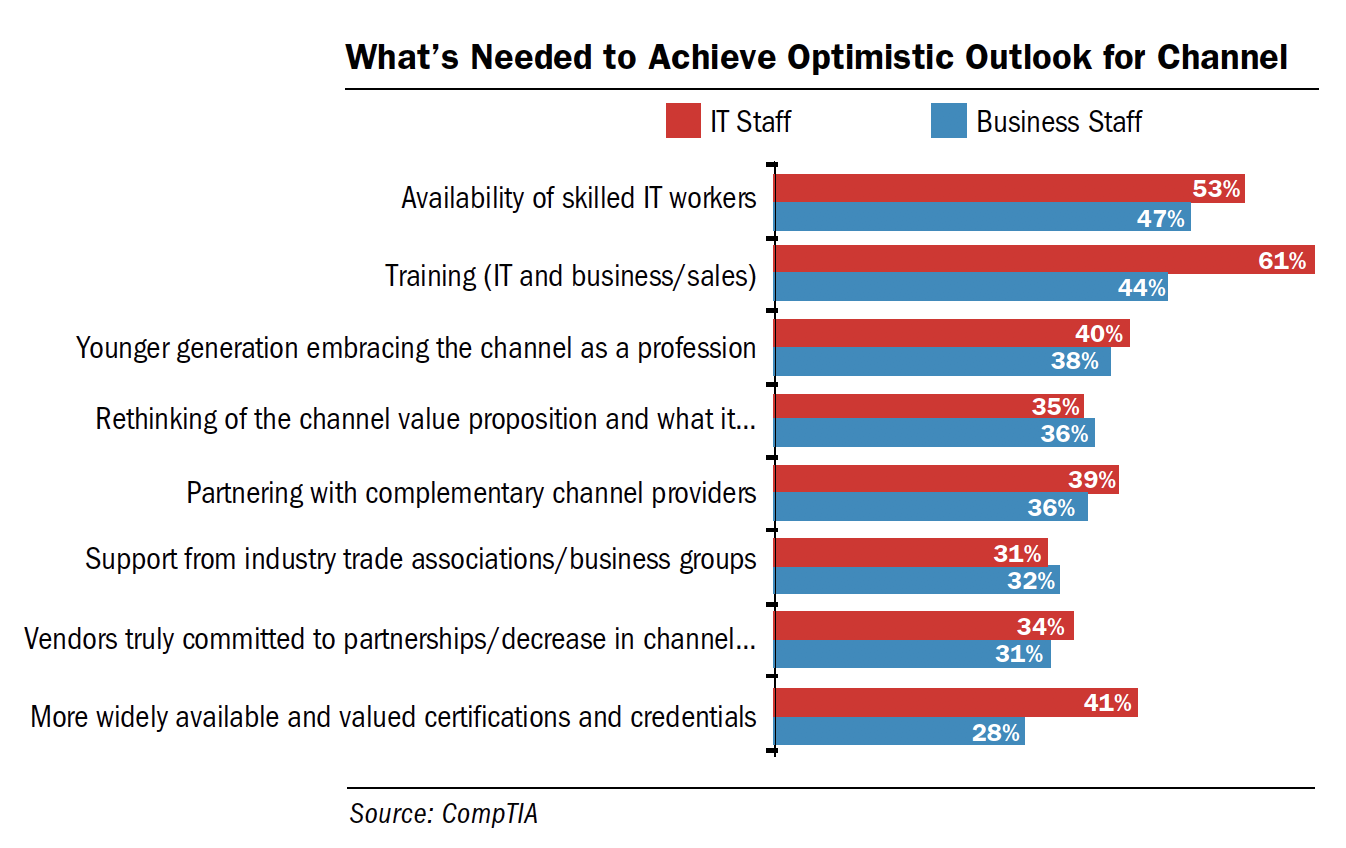 Much of the optimism among the IT channel, as well as the perceived broadening of customer opportunities, can be attributed to the buzz around emerging technologies. From IoT solutions to robotics and drones to automation, artificial intelligence and augmented reality to blockchain and biometrics to 3D printers, sentiment for emerging tech is mainly positive, suggest Comp-TIA findings, despite this maze of options to consider. Research firm IDC, incidentally, predicts that emerging technologies such as these will account for almost a quarter of total information technology spending by 2021.

Perhaps using the word “buzz” around emerging technology is unfair because when asked to name the major factors behind the decision to offer emerging tech, customer demand was far and away the number one response, named by 72 percent of channel organizations. Better revenue opportunity than current portfolio was second, at 59 percent, followed by competitive differentiation at 52 percent.

What’s more, while many channel firms still are early on the adoption curve, three-quarters of respondents say they view these new paradigms as revenue opportunities, compared with just 14 percent that consider it a threat to the channel and another 9 percent that are ambivalent to the potential. A full half of all respondents, meanwhile, expect most of their revenue in the next two years to come from net-new business.

“It stands to reason that much of that new business could be predicated on emerging tech solutions,” argued CompTIA analysts.

At the same time, channel partners are well aware they face growing pains and learning curves before revenue opportunities are realized. Indeed, respondents ranked the skills gap for emerging technologies as the top reason for a pessimistic outlook for the future, up 12 percentage points from 2016. Additionally, when asked what things will be needed to help ensure hope for the channel’s future, 54 percent of respondents cited both technical and business training for themselves, while 51 percent identified the need for skilled workers, particularly in the areas of emerging tech. Both percentages represent a significant jump from 2016, said CompTIA.

“With any new endeavor, come challenges; emerging tech is no different. Available resources, skills training needs, hiring difficulties and the fear of the unknown are among the hurdles that channel respondents say they are grappling with as they dive into these new areas,” said CompTIA researchers. “This gap builds upon existing challenges the channel is facing as it continues efforts at digital transformation.”

The emerging tech challenges are fairly consistent in hitting channel firms of all sizes, though medium sized companies (50 to 499 employees) appear hardest hit. This is likely due to the fact that the largest firms have the resources and reach to deal with cost of entry and skills gap challenges, while small firms are only moving slowly into emerging tech as needed. Medium-sized firms are large enough to dive in, but typically face some resource constraints, shows the CompTIA study.

“It’s not unlike the advent of cloud computing 10 years ago, which prompted a host of questions from solution providers,” said CompTIA. Only this time around, the early days of deployments are breeding more optimism compared to the early days of the cloud, which channel partners and market observers viewed early on as mostly disruptive, if not altogether threatening.

This article originally appeared in the January/February 2019 issue of ChannelVision.

Gardner to Bring Cybersecurity Sales and Channel Expertise to SaaSMAX→