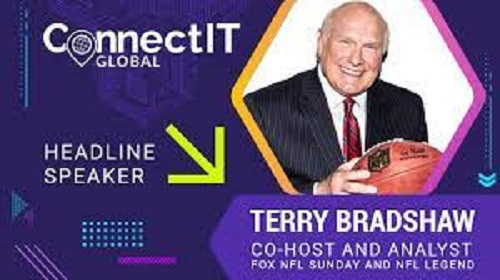 Kaseya, a provider of unified IT management and security software for managed service providers (MSPs) and small to medium-sized businesses (SMBs), announced its “back to Vegas, baby” for Connect IT Global.

The conference attracts thousands of  IT professionals, business owners and industry leaders to network with their peers, learn about the latest trends impacting MSPs and IT departments and get up-to-speed on the latest products to maximize efficiency and boost business.

Terry Bradshaw, beloved former Pittsburgh Steelers quarterback and sports analyst, will headline the event. Bradshaw, who also is an actor and singer and who has appeared in TV shows and movies, played 14 seasons with Pittsburgh and led the Steelers to four Super Bowl titles. He is a member of the Pro Football Hall of Fame and is recognized as one of the greatest quarterbacks of all time.

Also appearing at Connect IT Global will be Frank Abagnale, presented by sponsor ThreatAdvice, is an American author who served as the inspiration for the Steven Spielberg film, Catch Me If You Can, starring Academy Award winner Leonardo DiCaprio. His biography, which inspired the film, tells the story of how he duped people into believing he was a doctor, an assistant state attorney general and even an airline pilot who logged more than 2 million air miles. Abagnale has collaborated with the FBI for 45 years and lectures at the FBI Academy and its field offices. He served time for his crimes and today is a motivational speaker who runs his own consultancy firm.

Another featured speaker will be Robin Robins, who is among the channel’s most in-demand speakers. She is a marketing consultant, sales trainer and author who specializes in highly effective marketing strategies for VARs, systems integrators, MSPs, solution providers and IT consulting firms. To date, more than 10,000 IT business owners worldwide have learned and implemented the marketing systems she has developed to create hundreds of millions of dollars in new revenue streams for their business.

For more information or to learn about other cities involved with Connect IT Global, visit connectit.com/local/.