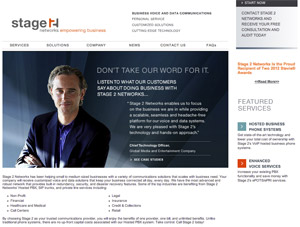 The American Business Awards are the nation’s premier business awards program, and the Stevie Award trophy is considered one of the business world’s most coveted prizes.

Created to honor companies that demonstrate excellence through numerous achievements and positive contributions within the business sector, the Stevie Award plays an instrumental role in bringing further recognition to many of Stage 2’s recent professional successes.

“We are honored to obtain not one, but two coveted Stevie Awards for Company of the Year and Executive of the Year. What distinguishes Stage 2 from its competitors is our ability to provide customers with not just a voice service, but a comprehensive voice solution , as well as the support of a dedicated team of professionals that offer personalized service and truly care about their client’s satisfaction,” said Joe Gillette, Chairman and CEO of Stage 2 Networks. “These awards are yet another great example of Stage 2’s growing track record of success, and come on the heels of other recent, exciting announcements including our ranking on Inc. Magazine’s 31st annual Inc. 500|5000.”

Stevie Award winners were selected by more than 270 executives nationwide who participated in the judging process this year. The judging panel reviewed more than 3,000 nominations from small, mid-size and large organizations from virtually every industry.