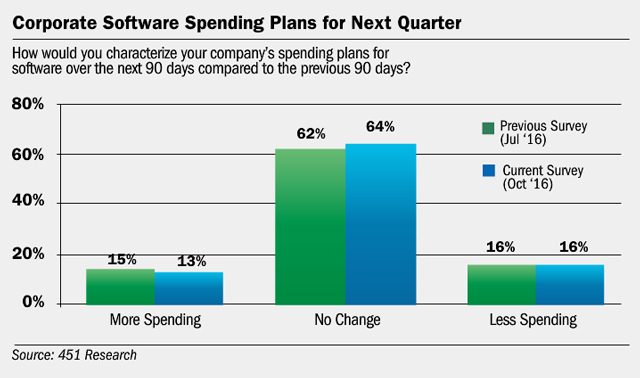 The latest findings from 451 Research suggest overall business software spending remains “bogged down,” and the firm expects a decline in purchasing going forward. The October 2016 survey of executives involved in software spending shows a decrease in spending cuts across all categories, with CRM and business intelligence among the most negatively impacted.

A total of 13 percent of corporate respondents say their company will spend more on software during the next 90 days, down 2 points from the previous survey in July. Another 16 percent predict less spending, unchanged from the previous survey. Overall corporate capital budgets are registering a decrease as well. Only 9 percent of respondents said their company’s cap budget has increased during the past 90 days, and 18 percent said it has adjusted lower – 3 points worse than previously and 1 point weaker than a year ago.

The number one reason is that companies “currently do not need to purchase any new software” (28 percent) – up 5 points from July to the highest level since October 2011. At the same time, 20 percent say “existing software is getting outdated and must be replaced” but that’s 1 point lower than previously. Another 10 percent say they are “making better use of existing resources,” down 3 points from July.

After registering one of the biggest increases in the second quarter of 2016, CRM is now the category taking the biggest hit, say 451 analysts. Just 10 percent of respondents in the October survey said their company is increasing customer relationship management software spending during the next 90 days, with 9 percent decreasing spending – a net 8 point drop from July. Spending for business intelligence (BI), meanwhile, has fallen 6 points to its lowest reading in two years – with 11 percent increasing spending during the next 90 days and 7 percent decreasing.

Security software remains a bright spot in terms of overall projected spending, but it is down 4 points from the prior quarter. Spending for data storage and virtualization also remains in positive territory, though lower than the previous three-month period.