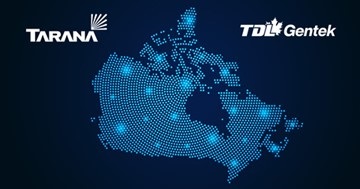 TDL Gentek is the first Canadian-owned and operated distributor signing with Tarana, a growing private company transforming the market with a new, innovative approach to rapid broadband deployment. With this strategic partnership, TDL Gentek customers will be able to provide reliable, high-speed internet across Canada with low costs and short installation times.

Tarana’s recent product announcement reported on the company’s plans to release 6 GHz G1 radio models that support 160 MHz channels, and a software upgrade to shipping 5 GHz G1 radios that enables the same. Doubling the channel bandwidth of G1 allows it to deliver up to 1.6 Gbps of aggregate capacity per link. When released mid-next year, this will be a two-times upgrade to G1’s link speeds, combined with its signature resilience in the face of obstructions and interference, which will enable ISPs to deploy wireless networks with unprecedented competitiveness and staying power.

TDL Gentek has a history of supporting fixed wireless internet access in Canada, through wireless ISP customers, several of who are deploying Tarana’s advanced technology with great success.