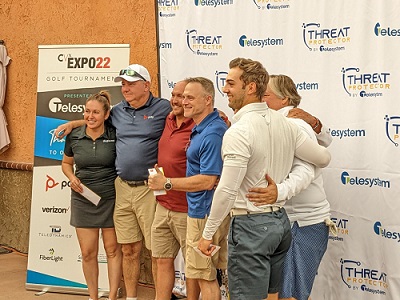 CVx EXPO22 opened Wednesday at the Talking Stick Resort in Scottsdale, Ariz., with chamber-of-commerce weather welcoming and warming about six dozen golfers playing for more than $33,000 in prize money.

Later in the day, after exhibitors erected their displays and spread out their swag, nearly 700 attendees mingled during a three-hour meet-and-greet reception.

It was a perfect beginning to the first solo version for CVx, which has collocated with another conference for the past decade, and it was a fitting reward for ChannelVision Magazine’s 20-year anniversary.

In the golf tournament, playing under mostly sunny skies and temperatures in the mid-70s, a team comprising members of Poly, Ring Central and SCB Global shot a collective 29, which was a six-stroke lead over five teams that tied. The winning team won $1,500 to split among Matt Howarth, Darra Knapp, Ricky Todd and Gino Toromazote.

The Talking Stick Resort Golf Course has a tie-breaking procedure that involves the difficulty of each hole. The result is the team comprising Ramon Perez, John Martin, Luke Crissy and Matt Thompson took second, splitting $900 and third place ($500) went to the team of Larry Robinson, Ryan Casay, Billy Drake and John Reed.

Two specialty prizes of $200 gift cards for the resort’s clubhouse merchandise went to Anthony Hansen for being closest to the pin and to Reid Schmidt for the longest drive.

While the CVx EXPO is intended to bring providers and partners together during the event, which closes Friday, the conference also has a heart teaming with Telecom for Change to raise $10,000 for the AZCyber Initiative.

The AZ Cyber Initiative is a non-profit organization dedicated to unlocking career opportunities for Arizona students who are interested in cybersecurity as well other information technology (IT) disciplines. The organization offers programs designed to help students achieve their personal goals, as it aims to create opportunities for Arizona high school students to receive the inspiration, training and support they need to pursue careers in cybersecurity and related fields through scholarships, internships, mentorships and cyber boot camps.

To join this effort or to contribute, go to givebutter.com/CVxExpoAZCyber.