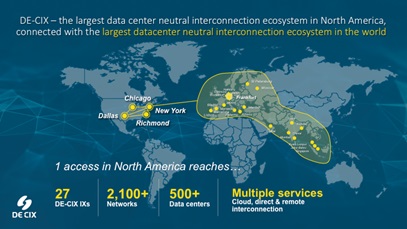 DE-CIX, a global Internet Exchange (IX) operator, has doubled its North American footprint with two additional IXs, one in Chicago, and one soon to be ready for service in Richmond, the two locations expand on and interconnect with DE-CIX North America’s existing multi-service interconnection platforms in the New York and Dallas.

DE-CIX Chicago is available for service today in 12 facilities throughout the metro market including key carrier hotels at 427 S. LaSalle and 350 E. Cermak. DE-CIX Chicago anchors the Midwest region.

Connectivity in and throughout Chicago reaches the east, west and southern coasts of the United States with direct connectivity to Canada, firmly positioning the market as a core interconnection point in North America.

The Richmond Virginia-IX (RVA-IX) leverages the market’s existing IX. RVA-IX was launched in 2016 as a non-profit community by: SummitIG, Richweb, VA Skywire, Pixel Factory, and the Bank of Virginia. The RVA-IX has access points throughout the Richmond market with Pixel Factory Data Center, EdgeConneX, and QTS Datacenters. Through the asset acquisition of the RVA-IX, DE-CIX will take operational ownership, and will expand upon its interconnection capabilities benefiting the local and regional market.

Integration into the DE-CIX interconnection ecosystem means that connected networks in Richmond will have access to more services, can reach other DE-CIX locations and more ASNs, and can enjoy increased redundancy and resilience.