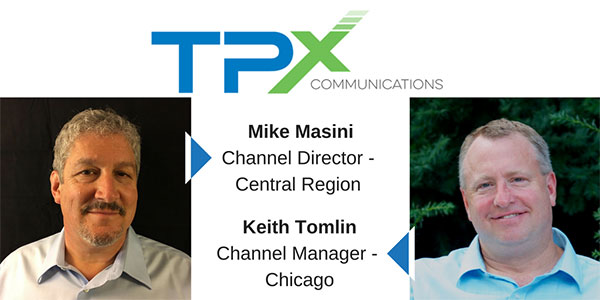 TPx (formerly TelePacific), has hired Michael Masini as channel director for the central region and Keith Tomlin as regional channel manager for Chicago.

“Michael and Keith both came highly recommended to TPx from several of our most trusted Midwest partners, who highly valued their expertise and work ethic.  They will really complement our nationwide expansion,” said Bisnoff. “We’re thrilled to have them on our team and know they’ll do an excellent job of further developing our central regional channel relationships and engagement.”

After meeting with Bisnoff and Jim Delis, TPx’s senior vice president for national channel development, and hearing their vision, Masini was convinced that TPx was a great fit. “I wanted to work for a company that had a strong focus on partner relationships,” Masini said. “During my exploration, I spoke with many master agents and each one was more complimentary about TPx than the last. They offered exemplary reviews of the company’s people, support, responsiveness and accountability, highlighting their trust in CEO Dick Jalkut and the entire leadership team.”

As channel director for the central region, Masini is responsible for building and developing a successful team of channel managers in the region and orchestrating the proper resources so they can recruit the right partners, then train and support them, so TPx is top of mind for any unified communications, managed IT and/or network connectivity opportunity.

“As we grow in strategic markets in the central region, we will hire the highest caliber channel managers who have deep relationships with the partners who are most poised to sell TPx services,” explained Masini.

Tomlin, for his part, has been a steadfast member of the Chicago channel community for more than 10 years.

“Keith is an effective advocate for his partners because he always presents ‘win-win’ solutions,” Masini said. “Within days of joining TPx, his partners wanted to meet with him. They couldn’t wait to get started. In addition to being a very successful channel manager, Keith is an active volunteer for several important causes in Chicagoland. He will flourish in the TPx culture.”

“A lot of companies claim to be channel friendly but when you look under the hood they throw channel managers out into the market with very little back-office support, making it difficult for them to have a real impact,” said Tomlin. “TPx has the people, resources and support I need to be proactive and help my partners grow their business.”

TPx now has 24 channel managers across the country and has plans to hire at least another eight on the East Coast to fill out its national channel sales management team.

Gerald Baldino - May 18, 2021 0
New Horizon Communications has expanded their stack solutions to include secure, cloud-based fax services. NHC is enhancing its cloud-based eFax offering to include fax encryption...