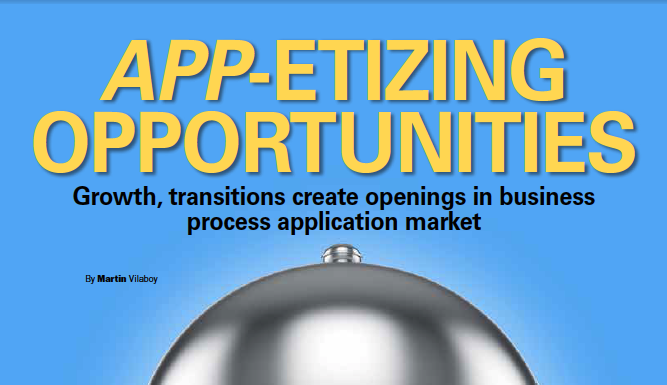 Telecom channel executives have long heard the warnings to move “up the stack” and avoid becoming “dumb pipe” providers, but there are also some good reasons on the demand side why agents should be to looking to deliver more cloud-based business applications across those pipes. Several categories within business process software are currently experiencing double-digit growth trajectories, show findings from Forrester. It’s also a market presently seeing “significant technology disruption,” says the research group, and that could be good news for attacking providers. After all, common sense suggests it’s easier to attack under the shadow of some disruption rather than when things are good and customers are content.

Not surprisingly, the technology disruption also is a key driver of the revenue growth, with businesses looking to accelerate the pace of replacing aging on-premises software with subscription-based software as a service. Traditional licensed software sales, meanwhile, are expected to come in flat to declining. As the market evolves toward subscription-based (SaaS) business applications, we have and will continue to see a proliferation of new players and new types of application categories, says Forresters. For example, in the e-commerce application category alone, Forrester cataloged 45 subcategories and nearly 500 vendors. All the while, many non-incumbent providers have been able to gain a significant foothold.

Indeed, “Forrester’s analysis of the evolution of the business applications market over the past decade indicates that the large, traditionally on-premises vendors (IBM, Infor, Microsoft, Oracle, SAP) are losing share to faster-growing, cloud-native rivals,” said the research firm. The five largest traditional vendors, named above, will go from a collective business process applications share of 25 percent in 2010 to a share of 21 percent in 2017.

SaaS pure-plays Salesforce, Workday and NetSuite, meanwhile, plus SaaS converts Intuit and Adobe have grown their collective share during the same period from 4 percent to 11 percent, says Forrester. “All other providers” – presumably the group telecom channels would fall under – account for just less than 70 percent of global business application revenues. 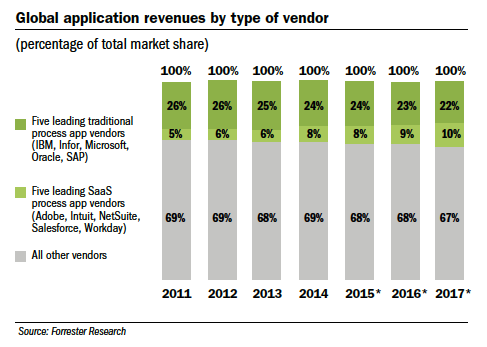 Not that traditional providers have fallen asleep at the switch. “Virtually every traditionally on-premises software vendor we have spoken with in 2015 is seeing significant growth in subscription revenues and flat to declining license revenues,” said the Forrester study on the business process application market.

In terms of the overall size of the opportunity, Forrester’s global market analysis indicates that the core business process applications segment, supporting both customer and efficiency-focused solutions, will grow from $141 billion in 2015 to $156 billion in 2016 and $169 billion in 2017. Among the primary categories that fall under “business process applications” are customer relationship management (CRM), call center/contact center systems, human resource management (HRM), product lifecycle management (PLM), e-purchasing, and specific products within financial management such as accounts receivables.

“The market is a dynamic one because clients are continually looking for new packaged apps for increasingly specialized business processes,” say Forrester researchers.

U.S. sales dominate and set the pace of the market, with 52 percent of the $156 billion market for business process applications in 2016 coming from purchases in the U.S., Forrester estimates. An additional 5 percent will originate in Canada and Latin America. CRM, commerce servers and human resources management are the fastest growing categories of process apps, at 20 percent, 17 percent, and 16 percent, respectively, reports Forrester.

RELATED: In the Trenches: Attention and Demand

That’s partly because a quarter to a third of enterprise buyers surveyed by Forrester in the fourth quarter of last year said they plan to replace most or all of the 12 types of business applications covered by the Forrester study with SaaS within the next two years. In addition, 19 percent to 23 percent have already replaced these applications with SaaS.

“While SaaS adoption is growing in all process application categories, adoption rates vary widely across categories,” according to Forrester researchers.

All the while, human resources software, risk management and payment, and supply chain management (SCM) apps are tilting toward SaaS, say Forrester researchers, with SaaS representing a third to two-fifths of total revenues in 2016.

The rock star of business process software, CRM applications, which span the customer life cycle through marketing, sales and customer service, is both the largest and fastestgrowing segment within the category. Forrester estimates robust growth rates of 20 percent for 2016, followed by 13 percent in 2017, from approximately $24 billion in 2015. Salesforce is the dominant vendor in this category, with projected 2015 total revenues of $6.65 billion and revenue growth of 24 percent. 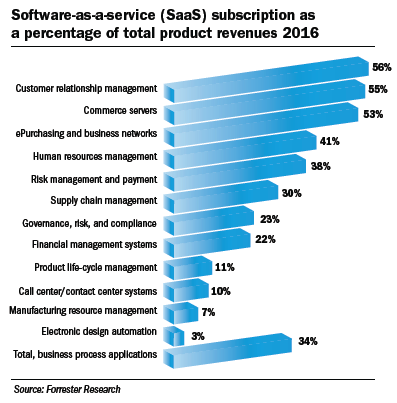 “The core CRM app of Salesforce automation is widely adopted, so growth will increasingly come from related apps such as marketing automation and customer services and support,” says Forrester researchers.

The second largest process application category, the finance systems software market represented about $23 billion in sales in 2015, with growth expected of 12 percent in 2016 and 5 percent in 2017, driven largely by usability and obsolescence challenges in existing on-premises finance systems and an increasing appetite for SaaS.

In addition to core accounting capabilities at the heart of ERP systems, such as NetSuite, Oracle and SAP, financial management software also includes adjacent capabilities that are moving to SaaS even more quickly than the core, says Forrester. These include revenuefocused systems such as billing, receivables, tax and collections; systems for financial assets (e.g., cash); and expenditure solutions (e.g., travel and expense management). “Enterprise performance management (EPM), which includes solutions planning, financial reporting and analytics, is part of this overall category and is experiencing a major shift to SaaS,” say Forrester researchers.

Next up in terms of size and growth potential, HR applications support a broad range of people and talent processes, ranging from core administration of employee records, benefits and payroll to talent acquisition, employee performance, career development and training.

“While people and talent are traditionally viewed as cost centers with onerous compliance implications, customer-obsessed companies view them as a growth-oriented investment that drives customer engagement,” says Forrester.

“Significant growth is being driven by replacement of older, on-premises systems with SaaS alternatives as well as by increased process innovation for talent acquisition, employee engagement and talent development,” says Forrester. Leading vendors in this segment include ADP, Ceridian, Oracle, SAP SuccessFactors, Ultimate Software and Workday.

Another relatively mature business process application, call and contact center software saw approximately $12 billion in global sales last year and is expected to grow 7 percent annually both this year and next. Investment here has been driven by a need to provide a “consistent customer experience across various interaction channels at various life-cycle stages,” says Forrester. “The category has become more complex as the array of new customer interactions methods has expanded, leading to considerable churn in the vendor landscape.”

What Forrester defines as epurchasing software includes products designed to help improve all the stages of the buying process, such as online procurement and sourcing, contract life-cycle management, automated spend analysis, electronic invoice presentment and payment, services procurement, supplier risk and performance management, and supplier network services. The market (including supplier and EDI-based networks) is valued at $7.8 billion in 2015, and is expected by Forrester to grow by 9 percent in both 2016 and 2017 to more than $9 billion.

“Even though procurement functionality is typically included in ERP suites, it remains fertile ground for specialist vendors across the various subcategories in the segment, and it is frequently deployed in the cloud to leverage managed supplier networks,” says Forrester.

Also worth noting, PLM and SCM are mature business process categories, with the former estimated to grow at a 4 percent rate in 2016 and 2017, and the latter by 12 percent this year and 8 percent in 2017.