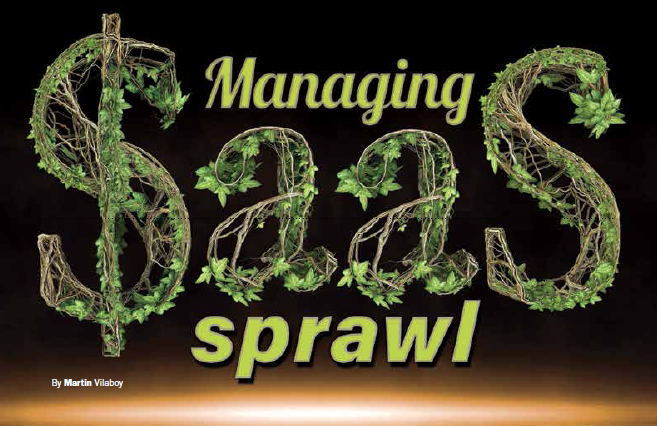 The emerging need for centralized SaaS

One of the benefits behind the strong uptake in SaaS-delivered business solutions is the ease at which they are procured. In many cases, all that is needed is a credit card number to obtain a free trial. And according to data from SaaS management company Zylo, whose AI-powered engine has processed SaaS spend, license and usage data equating to more than $21 billion in SaaS spend under management, there’s been a “big shift in how these applications are purchased and managed,” with more organizations enabling employees to research and procure their own software tools. While not an entirely new trend, it’s a shift that’s been compounded by the realities of the work-from-anywhere revolution.

And while the speed and agility of self-procurement are distinct advantages, and sometimes necessities, allowing employees the freedom over their application decisions also is creating a new set of challenges. Enterprise SaaS customers, Zylo data analysis shows, are experiencing a type of sprawl of SaaS applications across their organizations, and it could be choking off the value of their SaaS investments.

Make no mistake, employees aren’t just occasionally buying a rogue solution on their own. Rather, the majority of SaaS procurement is being executed by employees and departments outside of the bounds of IT. 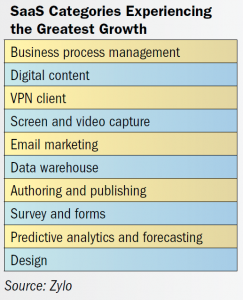 “Recent SaaS growth is driven primarily by business units and individuals, rather than the IT department,” said Zylo analysts.

All the while, SaaS-friendly enterprises are supporting portfolios of more than 320 SaaS applications on average, with the largest enterprises analyzed by the AI engine supporting more than 600 on average. Enterprise organizations spend nearly $65 million a year on average on SaaS each year. And SaaS solutions are entering enterprise tech environments at robust rates. The average organization sees eight apps entering its environment every 30 days. 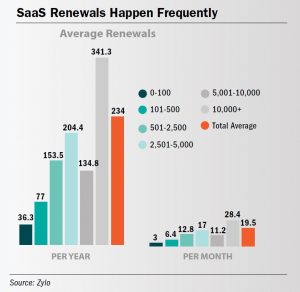 “Because organizations have so many SaaS applications – and they’re purchased and managed throughout the organization — it’s easy to lose track of when each application is set to renew,” said Zylo researchers. “When organizations are caught off guard by a SaaS renewal, hasty renewal decisions are made — without data to back them up. That means applications are being renewed that shouldn’t be, and teams aren’t negotiating price or terms as much as they could be.”

Another upshot of SaaS sprawl is a majority of organizations having multiple applications that compete to serve the same or largely similar functions. A common example is when a company might have one project management tool used by the engineering team, one preferred by the marketing team, and a third widely adopted by the product team. 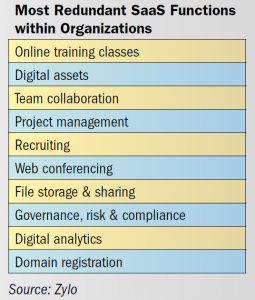 “When business units have SaaS decision-making power, they tend to seek out best in breed solutions for their functional area,” explained the Zylo data report. “For example, the best project management tool for marketing might not be the same as the best tool for product teams. But more tools don’t necessarily mean more output and greater productivity.”

A lack of centralization of and visibility into SaaS applications also could be negatively impacting how they are used. According to Zylo’s data analysis, the average organization is only utilizing 60 percent of their provisioned licenses, leaving 40 percent wasted, unused and ripe for optimization.

“In general, we advise aiming for a target utilization rate of 90 percent or higher. This ensures wide adoption and use, with a small buffer built in for reassigning and provisioning licenses,” said Zylo executives.

At the average organization monitored by Zylo, about one in five employees expenses SaaS when procuring a solution, and interestingly enough, Zylo data suggests a connection between companies that give employees greater flexibility to expense SaaS and higher utilization rates within a company. Large enterprises (organizations with 5,000+ employees) have a far fewer percentage of employees expensing SaaS applications, between 8 percent and 10 percent, while at smaller enterprises (1 to 500 employees) more than a quarter of employees expense SaaS. All the while, these larger organizations experience much lower utilization rates of 45 percent to 49 percent compared to the smaller companies that see utilizations rate well above the 60 percent average. 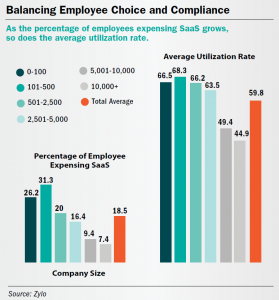 “Our interpretation of this data is that the more choice employees have in the SaaS tools they use, the more likely they are to use them,” said Zylo.

That’s not to suggest organizations allow their employees expense software at whim. “Rather, we’re seeing the most progressive organizations strike the right balance by instituting freedom within a framework,” the report continued.

While there are upsides to empowering employees to obtain their own solution, and a decentralized approach to SaaS procurement can increase organizational agility and introduce new opportunities for innovation, an unfortunate side effect is a lack of central visibility into all SaaS in use across the organization.

“This is a big problem, as you can’t optimize what you don’t know exists,” warned Zylo researchers.

And a lack of proper SaaS management often leads to inefficient spend, unnecessary costs and steep security and compliance risks.

In turn, several SaaS management providers offer channel programs whereby their partners can help their customers strike the right balance between business innovation. In general, SaaS management platforms proactively identify and manage all of the SaaS applications used in the business, while providing a centralized pane of glass for managing and reporting on SaaS sprawl, explain executives at TrustRadius, a review site for business technology.

The platforms primarily serve as a singular system of record for what SaaS applications are used across an organization, with mechanisms for proactively or automatically identifying which applications are in play. Beyond this ability, SaaS management platforms often focus on managing either the spend (usually entailing elements of license management, contract renewal management and SaaS budget visibility and reporting) or operations of SaaS applications (user access controls for SaaS apps, monitoring SaaS onboarding, adoption and offboarding), with many products expanding to cover both ar

eas. There are also usually security benefits from improved visibility into SaaS ecosystem, particularly shadow IT. 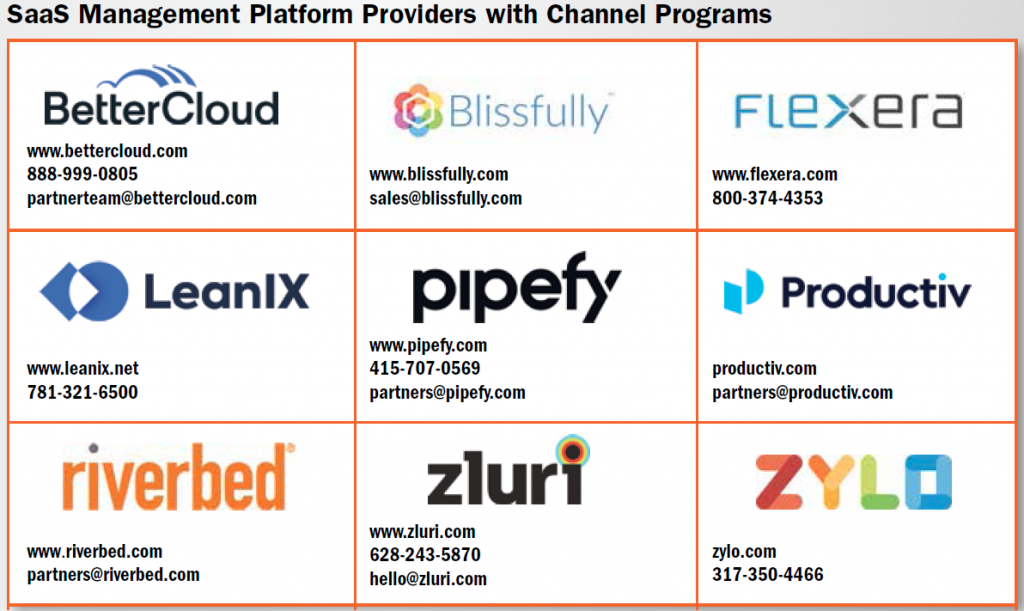