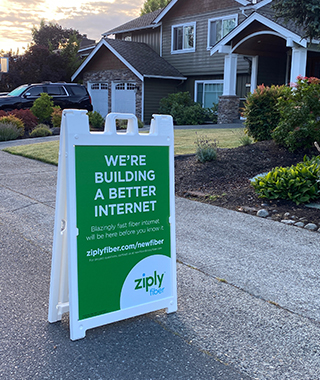 Today, on its 365th day as a company, Ziply Fiber announced plans to bring gig-speed fiber internet service to an additional 22 markets across Idaho, Montana, Oregon and Washington this calendar year.

This expansion will focus mostly on smaller and rural towns, and is part of the company’s multi-year $500 million investment in its network and improved service in urban and rural settings throughout the region.

The announcement comes on the heels of last week’s launch of fiber service in Moscow, Idaho, the company’s 16th new fiber market since it began its four-state fiber expansion last spring, after acquiring the Northwest assets of Frontier Communications for $1.35 billion.

Since that time, Ziply Fiber has hired more than 400 employees and has laid more than 1,000 miles of fiber to help improve internet connectivity in rural areas to be on par with larger metropolitan areas, and has added thousands of customers onto its new fiber network.

These developments have been hailed by state leaders across the Northwest.

As part of its work in its four-state service area, construction crews will be building fiber service in stages through several areas of each city and town. While the work will take several weeks and months to complete, the company expects to connect its first sets of customers in each town this summer and add more and more addresses each week as the build continues.

While it will take time to upgrade 250,000 square miles of land throughout Ziply Fiber’s service area with new fiber-optic cables, local hubs, new offices and hardware to run the network, the company is capitalized for and committed to hundreds more projects.

As the company rolls out fiber-based services over the next several months and years, its Ziply Internet (DSL) customers will begin seeing service improvements. Part of Ziply Fiber’s investment is going to work that’s already underway to improve its core and aggregation network, across which all Ziply internet traffic travels.