It may be heady times in the ICT (information and communication technologies) world with more infrastructure, applications and devices appearing in the Asia-Pacific region than ever before.

But, below the surface, the outlook remains a complex and highly nuanced one.

Demand is burgeoning for datacenters and fibre optic connectivity across the region. But changing demand patterns and the arrival of new players – particularly in the OTT space – have disrupted traditional business models and foreseeable market behaviours. Set to enter the picture are emerging technologies such as 5G that some predict will cause enormous changes in the mobile landscape. Alongside this, some see a plethora of new applications based on IoT finally gaining traction.

Asia-Pacific ICT futures clearly see many possibilities intertwined. Metaphorically, several business and technology equations need to be addressed at the same time. The IoT space, for example, may be exciting, but it is also the most problematic to forecast. At PTC’17, Dr Minoru Etoh, senior vice president at Japan’s NTT DoCoMo, predicted an upsurge in intelligent systems, particularly driven by 5G deployment, a “glue” technology bringing together many different applications and services.

He continues to suggest a successful IoT equation can be built from combining ICT and what he terms operational technology. “Existing operational technologies, such as construction technology, manufacturing technology and transportation technology,” he indicates, “to date don’t require significant communication capabilities…in the long run, however, those systems may need massively diverse sensor communication.” In turn, he suggests, this will drive advanced networks as major B2B systems take shape.

Within this, he suggests 5G will power major capabilities in a new generation of autonomous vehicles. Perhaps with this future in mind, some players are already making their bets. Intel’s USD15 billion purchase of technology specialist Mobileye in March 2017 had many reaching for their calculators: smart vehicles could individually generate a predicted 4000Gb of data every day, with Intel predicting a million cars will produce as much data as half of the world’s population currently does. As a result, datacentre players are also said to be taking these possibilities seriously.

Driverless vehicles may be a standout IoT application, potentially generating high data throughput at low latency, but these services will clearly impose specific network and service demand, and standardization is also important. “We will see the development of regional interconnectivity requirements as a consequence of the roll out of IoT and the inevitable applications that this will require,” suggests Eric Handa, CEO of APTelecom. However, in intercontinental terms, there may be less impact. “I can’t imagine driverless cars would lead to demand for intercontinental bandwidth just for practical reasons,” says Stephan Beckert, vice president of strategy at TeleGeography. “It is going to require connectivity that is very much localized.” 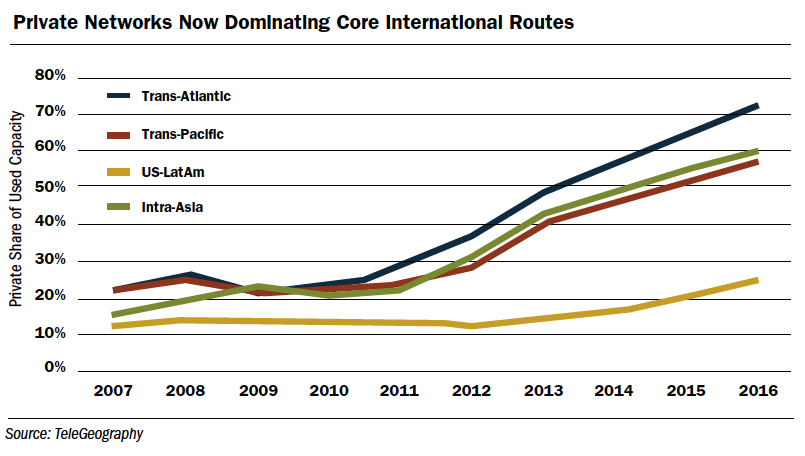 More generally, Bill Barney, CEO of Global Cloud Exchange (GCX), likewise suggests the weight in these kind of applications will fall on data processing: “The interesting thing is that IoT [will probably] drive a lot of compute and storage [capability].” Many other IoT applications present more modest profiles, he indicates. “[They] may be growth drivers but not necessarily massive consumers of bandwidth.”

Outside of data intensive applications such as autonomous systems, IoT more generally may continue to face credibility issues. Beckert reflects, “[IoT] has been the next big thing for two decades.” He says that the Cisco VNI outlook report has suggested that 10 billion active IoT devices by 2020 would still only generate 1 percent of global IP traffic. Practical issues, too, he points out, have remained the same: realistic applications, satisfactory business models and adequate network architectures offering the right coverage.

The role of big data from key IoT applications, in itself, however may have a more critical socio-economic role. At the University of California Berkeley’s CITRIS and the Banatao Institute, Dr Brandie Nonnecke focuses on the interface between these roles and upcoming communication policies. She believes these datasets will not only grow in importance but are becoming “the strongest international commodities” of all. She continues, “No matter what, stakeholders are wanting to gain access to that data. The data is going to be very valuable.”

Major new applications will emerge, she predicts, across many systems and at the macro-scale in areas such as urban management and resiliency. Sample applications already researched include big data management to improve urban traffic congestion/pollution emission targets, with real-time models built from comparisons around the globe. Still, Nonnecke acknowledges some likely bottlenecks remain in applications concerning both proprietary technologies and interoperability of such systems. At a national level, smart technology policies will need governmental oversight teamed with private sector efforts to stimulate broadband development to do this.

Nonnecke takes healthcare as another example driving connectivity if not massive data flow. “Healthcare is going to be a huge driver for network deployments nationally and internationally,” she predicts, arguing the alternative is unsustainable demand on the system with “catastrophic” consequences. She ticks off the upcoming factors: “By 2050, 25 percent of the world’s population are going to be over 60 years old. Around 80 percent of these populations are going to live in low and middle income countries … increased chronic disease will mean greater healthcare demand.” She continues: “[This] is going to tax hospitals at a level we have never seen before,” she predicts. Avoiding and mitigating the pressures means, she says, early remote monitoring and then continuous monitoring where chronic disease is concerned. It will require a formidable, but justifiable, investment. “There is certainly a [financial] incentive to monitor early and frequently through remote systems,” she argues.

Meanwhile, the industry in its current burgeoning growth must still wrestle with another equation: video. For GCX’s Barney, “video [now] dwarfs everything else [in terms of traffic usage].” Here, Barney argues, what happens depends on how ubiquitous this current video trajectory becomes; the equation is then between demand, investment and return. “It is very expensive to transport video all over the world, and players may not be able to cover the investment costs.”

In an era where many consumers already enjoy real-time, full-motion video capability on their devices, pressures are building, he indicates, particularly for wireless operators because of the spectrum consumed. He argues more industry disruption is inevitable, but the disruption will in turn enable more innovation.

Even on present trends without standout new demand, major secular changes are occurring in various parts of the ICT value chain, and the future ecosystem may look very different. APTelecom’s Handa says, “Beyond 2020, the current buyers of capacity (carriers), will have less requirement to purchase capacity for traditional purposes such as IP transit, as the largest content providers continue to proliferate caches within region and, in most cases, within each country.” He continues: “APTelecom believe that a large portion of this diminished requirement will be replaced by ‘tier 2’ content providers looking to build out their own regional/global networks.” Content providers have been making themselves felt, says Beckert of TeleGeography.

“Content providers are the primary drivers of capacity demand on key international routes, accounting for over 70 percent of used transAtlantic bandwidth, and nearly 60 percent of used trans-Pacific and intra-Asian submarine cable capacity,” he points out. Content providers are seeking to push content (and cloud service instances) ever closer to end users in order to improve performance, and sometimes due to regulatory requirements. With respect to the turning point in the market, TeleGeography projects that in 2017, content providers’ networks will account for just more than 50 percent of total used international submarine cable capacity.

Meanwhile, newer approaches including edge architectures might be increasingly attractive, particularly in non-critical applications where large data transfers are required. Eric Klinker, CEO and cofounder of Resilio, a company spun out of BitTorrent in 2016, suggests, “As computing becomes cheap and ubiquitous, systems at the edge of the network will become increasingly pervasive and capable, promising to unlock vast potential in almost every industry.

“The edge is a world defined by vast computing scale and very large data currently tethered to unreliable and low capacity networks,” he continues.

“The market opportunity ahead is to bridge that gap with software now and infrastructure over time to deliver game changing capabilities at the edge,” says Klinker. In this view, he says, software is the better answer to deliver more over the existing networks with a lower capex for the telcos and a faster time to market to capture opportunities at the edge today.

This digital article is sponsored by: Telegration